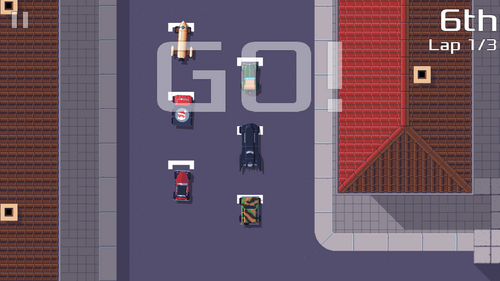 The most important change is… music!

I spent much time on opengameart.org looking for free music and ended up picking 5 pieces from FoxSynergy:

I was surprised how adding music really gave the game a more “finished” feeling:

I made other changes like adding small animations here and there, making the game more lively. For example the flags behind the planes in the “championship finished” screen float, and the police car light bars flash. I tried to think of other not too obnoxious animations to add to the existing vehicles but haven’t found any idea I liked so far, suggestions are welcome!

I also tuned the code responsible for picking which bonus you get when you hit a bonus crate so that you never get a turbo when you are at the first place. This should make getting best times less prone to randomness.